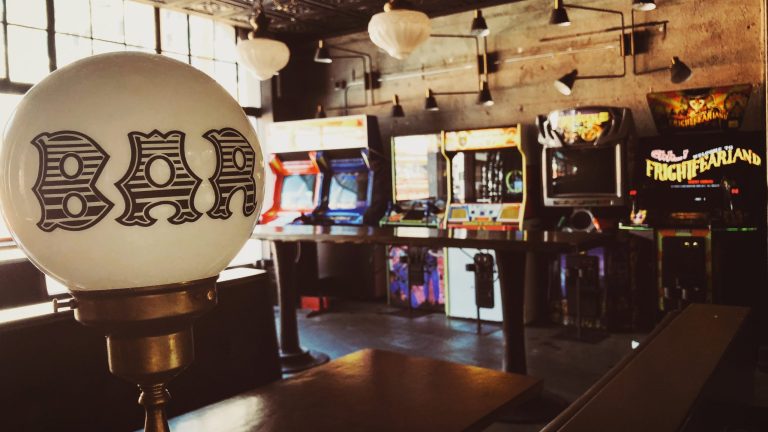 Amusement arcades were bustling social centers for kids and teenagers in the ‘80s and ‘90s. It was heaven on earth, a place where kids could escape the anxieties of school, forget about their parents, make mischief with their friends, and get lost in the hunt for the ever-elusive high score.

Sadly, over the past couple of decades, arcades have played an ever-diminishing role in the gaming industry. Preserving the history of retro games grows more difficult as time rolls on as specialty parts become scarcer and the games industry evolves. But hope lies in new, boundary-pushing business owners who aim to celebrate and preserve arcade culture while packaging the nostalgia in a way that saves these classic machines from irrelevancy and ushers them into the future by pairing them with trendy food and craft beer.

In recent years, business owners have recognized that arcade evangelists who yearn for the “good old days” represent an untapped market and have started opening new types of gaming establishments. Those ‘80s and ‘90s kids are now all grown up, which has led to a string of food and alcohol-purveying arcades finding success in major cities like New York (Barcade), Chicago (Emporium Arcade Bar), and Los Angeles (Button Mash). Arcade bar Coin-Op, which has locations in San Diego, San Francisco, and Sacramento, has become a go-to destination for patrons looking to kick back, sip on some craft cocktails, and play retro games with friends.

“The original idea behind Coin-Op was to open a bar-restaurant concept with something of an entertainment aspect to it,” says Coin-Op CEO Mark Bolton. “Me and my business partners grew up going to arcades in malls and entertainment centers in the ‘90s. We wanted to tie that into our new passion for cocktails and going out to bars and restaurants.”

For Bolton, the appeal of an arcade-bar hybrid arose out of the current generation’s desire for interactivity and constant engagement.

“People are looking for something to do other than just sit at a bar these days,” Bolton says. “There’s so much interaction in your daily life with social media and having your phone in your hand at all times. It’s nice for people to play games with their friends rather than just sit there.”

Cocktails and coin-ops are a match made in heaven. Dave & Buster’s has marketed this concoction to great success for years, boasting 117 locations across the country as of July 2018 and $332 million in revenue in Q1 2018, but there are still a few establishments out there that endeavor to preserve the purity of the ‘80s and ‘90s-style, family-friendly arcade experience.

Related Article: The Judge Dredd Arcade Game That Never Was

High Scores Arcade in Alameda, CA (with a second location just up the highway in Hayward) is a family-owned and operated business that was opened by husband and wife team Shawn and Meg Livernoche in 2013 (their original New Jersey location closed in 2010) that aims to bring back warm memories of the traditional amusement arcade, offering visitors a chance to play classic games they haven’t seen in decades, or for the younger set to discover the joy of playing Outrun, Tempest, and Galaga. Unlike Coin-Op and other bar-cades however, High Scores is an alcohol-free environment.

“We really do want to promote the idea that anybody of any age can come in at any time, and also give adults the opportunity to have a place to come and have fun where alcohol is not the centerpiece,” says Shawn, whose arcade has cultivated a tight-knit community of devotees of all ages since it opened.

“People who grew up in the ‘80s and ‘90s and now have families come in with their kids and want to show them the games that they grew up with, and it starts this cool generational thing, which is fun to watch,” says Meg.

“That’s what we love the most, the community that the arcade builds,” Shawn adds. “These classic games don’t just encourage kids to compete with each other. There’s a certain level of honor and dignity and learning and respect that comes along with all of this culture.”

While home consoles currently dominate the gaming sphere, the Livernoches don’t see the console and arcade markets as mutually exclusive. “Usually, the kids who play consoles at home also come in and appreciate our arcade,” Meg explains. “People who play Fortnite and League of Legends don’t necessarily translate that well to the arcade, but for the most part, kids pick our games up pretty quickly and like them just as much as console games because most of the basic skills are the same.”

Related Article: A Look Back at Splatterhouse, the Horror Arcade Game Masterpiece

The overlap in demographics between arcade and home console gamers has been one of the key factors in High Scores’ winning formula, and while some modern arcades, like YESTERcades (New Jersey) and Emporium Arcade Bar, do dedicate floor space to home consoles and even hold console game nights, to the Livernoches, the ultimate appeal of classic arcades is the fact that they provide unique, visceral, hand-crafted experiences that you simply can’t replicate at home.

“You can’t have the experience at home where each piece of furniture in front of you with a screen in it represents a different world,” Shawn explains. “And you’re supposed to play these games with specific kinds of controls designed in a specific way, and with a little presentation designed to keep you [engaged] in that world. You can’t do that at home on a console.”

The Livernoches grew up in the ‘80s and experienced the arcade boom firsthand, so stepping into High Scores feels like being transported back to that era. Legendary machines like Pac-Man, Donkey Kong, Frogger, and Defender line the walls of the ‘80s-inspired space, alongside later classics like Street Fighter II Turbo and Mortal Kombat II. The Livernoches even built a custom Oregon Trail cabinet decked out in pioneer-themed decor.

When asked if they think ‘80s-style arcades could ever make a comeback and permeate pop culture like they once did, the Livernoches are doubtful, though they don’t think the business will ever die out completely.

“I don’t think arcades will ever be as widespread as they once were,” Meg says. “Arcades were this big, bright light in the ‘80s that spread across and hit everybody’s community in some way. And now, arcades are competing with home consoles.”

“There are just a finite amount of machines and materials left,” Shawn adds. “I do have the awareness of a preservationist. We’re determined and committed to continue, year by year, to add more games to our collection that people can come in and play, and bring as much of that era back as possible.”

The authentic arcade experience is fortunately still alive and well thanks to business owners like the Livernoches, but is there a way to take the spirit of ‘80s arcades into the future? “We can [produce new machines] for classic arcade titles,” says Shawn, “or we can try to create new ones in the spirit of those old games.”

Launched in 2013, Killer Queen is a five-on-five combat game inspired by classic ‘80s and ‘90s gameplay and developed by BumbleBear Games. Machines can be found in over forty arcades and bars across the country, and Windows and Switch ports are scheduled for Q1 2019. The game could be a glimpse into a potentially bright future for new arcade development.

“Killer Queen is wildly popular,” Meg says. “We saw some people at California Extreme [an annual retro arcade show] developing for the physical space of an arcade, which is great. Stern is making pinball [machines], Jersey Jack is making pinball machines. People thought that [we saw] the complete end of the run, but it’s picking up.”

Author and video game historian Brett Weiss (The SNES Omnibus, The Arcade and Other Strange Tales) thinks that, if arcades are to ever truly make a comeback, they will have to continue to adapt to new trends — whether that means bar-cades or the multi-million dollar eSports industry.

“The arcade environment was very competitive in the late ’70s and early ’80s, and then again in the early 1990s with Street Fighter II and Mortal Kombat,” Weiss says. “This type of competitiveness carries over to esports. The link is the sheer competition.”

Indeed, some arcades have turned to eSports as the next step in the industry’s evolution. Arcade chain GameWorks offers eSports lounges in many of its locations where players can compete in a variety of games. Red Bull has also recently opened Gaming Spheres — a combination eSports arcade and live stream studio — in London and Tokyo.

The industry is looking beyond conventional hardware, too: arcades and amusement parks focusing on virtual reality have started sprouting worldwide. In fact, according to a 2017 report by Grand View Research (via Forbes), VR gaming could hit $45 billion in revenue by 2025. Mind you, this takes into account home VR setups as well, but the average living room can’t match a dedicated arcade center with space for more advanced experiences, not to mention that VR headsets are still very expensive. The arcade could become the best and most affordable way to enjoy VR around the world.

For the moment, arcade bars and breweries are compelling gamers to leave their homes to play games on a greater scale now than we’ve seen in a long time. If places like Coin-Op (which also happens to house Killer Queen cabinets) continue to make money and continue to rise in popularity, who’s to say there won’t be a reignited demand for new machines? Market research and statistics firm Statista estimates that the U.S. amusement arcade business will rake in $2.2 billion in revenue in 2019, an uptick from the last ten years.

“I think you’ll see arcade-style bars and arcades in [nightlife] settings proliferate,” says Bolton of the arcade bar model. “I’m even seeing regular bars start to have pinball games and one or two standalone cabinets more often. I think we’ll see more arcade [machines] along with food and cocktails and beer. That’ll go a long way.”

Bar-cades seem to be picking up steam in major cities across the country, but what of wholesome, alcohol-free arcades like High Scores? In 2016 (the last year the report was available), coin-op trade magazine Play Meter ran a “state of the industry” report that estimated that there were still 2,500 arcades in operation in 2015, and that number could grow if renewed interest in this niche market continues. Weiss thinks the future of arcades may lie in businesses willing to cater to clients young and old, citing examples like Free Play Arcade in Texas, which provides a family-friendly atmosphere by day and an adults-only bar-cade experience at night.

“I think a mix [of family fun and nightlife] might be the way. [Kids] and parents’ interests these days are more in line with each other than they used to be. There used to be certain activities for kids and certain activities for grown-ups. But we’re blurring the lines these days, with more adults enjoying geek culture. Maybe that mixed model is the best way forward.”

Bernard Boo is a freelance contributor. Read more of his work here.